How to Smoke a Brisket People new to smoking often get scared when it comes to Brisket and to be honest can you really blame them?

I mean, it is a nonsensical chunk of meat where you have to cook the point (thickest and fattest) end at the same temperature and precision as the flat (leanest and thinnest) end. But when you get this right, my goodness, it's just perfect!

Now, there is a whole history on smoked Brisket and why it has become the staple in low and slow BBQ, but here's the short version.

In the USA in the 1940's, farmers and butchers found it hard to sell and preserve, so on a Sunday after the farmers came to town with their cattle, butchers would cook the brisket at low temperatures for a long time over a pit to get rid of unwanted/tougher to eat and sell.

This is how BBQ in Texas was born. Brisket is naturally fatty and full of connective tissue. It holds a lot of weight on the cow so as you can imagine, it needs to be cooked slowly and at low temperatures cooked to break down that collagen and sinew. When smoke and heat penetrate the meat, it starts breaking down and getting softer and moister.  There is a whole heap of chemical reactions going on when you cook for an extended time with cuts of meat like Brisket but I won’t bore you with the science. All you need to know is:

If you aren’t sure how much fat to take off or what exactly to cut follow these easy steps to trimming a Brisket. The first step is to figure out what end of the brisket you have. Is it the point or the flat?  Or is it both? Looking at the above image, on the left-hand side of where my hand is placed, that’s the point or the fattiest part of the cut. On the right-hand side, that is the flat or the leanest part.

Next step is to remove any huge chunks of fat that will not render (melt down). Then all I do is shape the brisket into a shape that will look nice once it's cooked.

Remember taking too much fat will dry the meat out and not taking enough will result in un-rendered fat which will be chewy and not pleasant.

First and foremost don’t rush this step. Give yourself some time remember that good things come to those who wait. The million dollar question I’m always asked is "how long does a brisket take to cook?". Simple answer is at very least 8hrs, but that question includes so many variables such as:

Placement of the Brisket in the smoker can also affect the cook. I usually place the Brisket towards the back end of the smoker with the point facing the firebox so the flat is insulated from the heat and the smoke can travel over the meat aerodynamically. To Wrap Or Not To Wrap?

Never has there been a more important question in BBQ and both camps seem to be divided. There are positives and negatives on both methods.  I myself often wrap during the final stages of a cook, but why? In short, wrapping achieves two things. You can cook your meat quicker and it can trap in moisture. In addition whether to wrap or not wrap, there's another debate what to wrap it with. Butchers paper, or Aluminium foil.  Butchers paper allows the meat to still breathe but also creates a seal for moisture to stay in the meat. Aluminium foil however creates a hermetic pocket not really allowing the meat to breathe but it can cause the meat to push through a stall much quicker and cook much faster. The benefit in not wrapping is I find it has a heavier bark (outer seal) and for me, the meat becomes smokier. But each cook is slightly different (no 2 pieces of meat are the same). Sometimes I wrap in either butchers paper or foil whereas other times I don't wrap. By the time you hit the stall you would have been cooking for a number of hours. Your intermal meat temperature is stuck at 160 degrees F and you just can't push past it. It's been like that for 1-2 hours and it's simply not rising. You think to yourself “I need this meat cooked for dinner its now 2pm when will it be ready?” It is very common for meat to stall during a long cook.  It goes through a progress called “evaporative cooling” which is basically like the meat is sweating and like us humans, it gets to a point where its lost so much moisture in the smoker that it stalls in temperature. 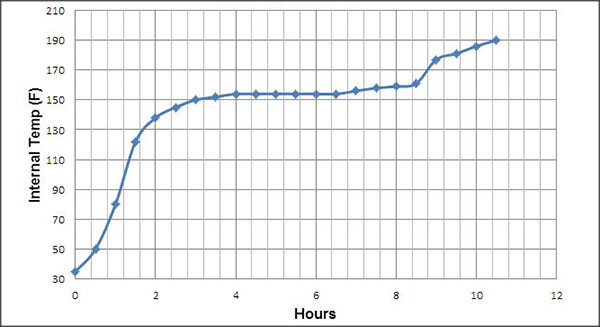 Now that’s all well and good to know what it is but how do you combat it?The easiest way to get through the stall is to wrap the meat in either aluminium foil or butchers paper. However, if you prefer not to wrap and persevere through it, the best bit of advice I have taken is treat the cook as if it was a locomotive going up hill as in you need to continually maintain heat in that firebox (sometimes push the heat up) to make it up the hill and through the stall.

This is the moment it has all come down to. You have let your brisket rest for a minimum of an hour and now it’s the unveiling of your masterpiece. Some liken it to their first school social; you're nervous about how it will look and what others will say. If you have cooked it right you're in for a treat. If you haven’t, don’t be too disappointed. Remember it takes time to learn all this and get it right, the Brisket king Aaron Franklin stated that his first briskets were terrible but people still ate them.

Carving the brisket is always important you can tell a lot from how someone has carved their meat. Are the slices too thin meaning that the cook was dry or are they too thick meaning it was cooked unevenly. My trick is to carve the flat with the grain into pencil tip slices. 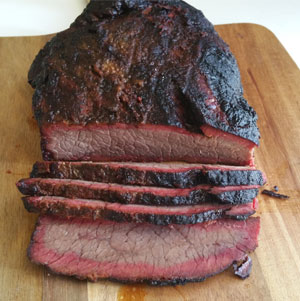 Still experimenting and getting used to different wood flavours? Check out our blog post about Choosing your Smoking Wood for your BBQ Smoker, just click here.

We also have a Smoked Brisket Recipe, click here.

Check out more delicious smoking recipes and How to guides
Want to take your barbecuing to the next level? Why not consider attending one of our BBQ Masterclasses It's an action packed day including all you can eat BBQ.